Platform progress and the Hackathon

The Haskell Hackathon last weekend was a great success with more than 50 people attending over the three days. Thanks to the sponsors and local organisers!

If you've been to a few of these events you learn that it's best not to come with too many preconceived ideas for what to work on. Since the point of the hackathon is really collaboration, you end up spending half the time talking and the other half working on cool ideas that other people bring.

I arrived with the general plan to work on the Haskell Platform release, and along with Don Stewart and Lennart Kolmodin we did actually get a bit done. I'm slightly embarrassed to admit that I spent three days at the Haskell Hackathon and wrote no Haskell code, only POSIX shell script and M4 autoconf macros!

Don and I updated the list of packages that will be in the first platform release. There were a few that needed to be bumped after the ghc-6.10.2 release. Our thanks to Ross who had already uploaded all the core and "extra libs" packages to Hackage.

The three of us also worked on making a generic Unix tarball of the platform. The point is for users of distros which do not yet have native packages for the platform to be able to download this tarball and ./configure; make; make install. We even managed to get something working just enough for people to be able to test it (haskell-platform-2009.0.0.tar.gz). 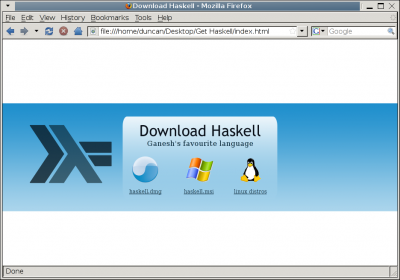 (The silly caption was Chris's joke in response to Ganesh's comment about an earlier design)
The idea is that we would put this at http://haskell.org/download/ to provide an easy start for new users. For OSX and Windows, the icons would link directly to a download and a page with install and post-install instructions. The Linux icon would link to another page with instructions for each supported distro, or the generic tarball for unsupported distros.

Outside of the Hackathon people have also been working hard on the platform release. If you're on the mailing list you'll know that Mikhail Glushenkov has been making great progress on preparing a Windows installer. He's got a beta version available (HaskellPlatform-2009.0.0-setup.exe). Report feedback in the platform trac ticket #6.

Gregory Collins has also been working hard on a cabal2macpkg tool to generate OSX packages from Cabal packages. He'll use this for each package in the platform and then bundle them all together (along with ghc) into one installer. He's been having difficulty with the fact that the package format for OSX Leopard is woefully under-documented.

If you're someone who prepares distro packages then now is an excellent time to get started making sure you've got the correct versions of all the platform packages and making a haskell-platform meta-package. See the platform trac for more details.