Welcome to the third edition of the Parallel Haskell Digest, bringing you news, discussions and tasters of parallelism and concurrency in Haskell. The digest is made possible by the Parallel GHC project. More news about how we're doing below.

This digest is brought to you by Eric Kow and Nicolas Wu. Nick will be taking over as maintainer of the Parallel Digest for the next few months.

It's tutorial season in the Parallel Haskell world, with Simon Marlow's Parallel and Concurrent Programming in Haskell, and Don Stewart's Numeric Haskell: A Repa Tutorial. The former gives a broad tour of parallelism and concurrency techniques in Haskell and the latter focuses on the Repa parallel array library. Both are very concrete and focus on real working code. Give them a try!

The word of the month (well, phrase really!) for this digest is parallel arrays. Parallel array manipulation fits nicely into Haskell's arsenal of parallel processing techniques. In fact, you might have seen the Repa library, as mentioned above, in the news a while back. And now there's a new tutorial on the Haskell Wiki.
So what's all the fuss?

Parallel arrays manipulation is a particularly nice way of writing parallel programs: it's pure and it has the potential to scale very well to large numbers of CPUs. The main limitation is that not all programs can be written in this style. Parallel arrays are a way of doing data parallelism (as opposed to control parallelism).

Repa (REgular Parallel Arrays) is a Haskell library for high performance, regular, multi-dimensional parallel arrays. All numeric data is stored unboxed and functions written with the Repa combinators are automatically parallel. This means that you can write simple array code and get parallelism for free.

As an example, Repa has been used for real time edge detection using a Canny edge algorithm, which has resulted in performance comparable to the standard OpenCV library, an industry standard library of computer vision algorithms written in C and C++ (a single threaded Haskell implementation is about 4 times slower than the OpenCV implementation, but is on par when using 8 threads on large images). 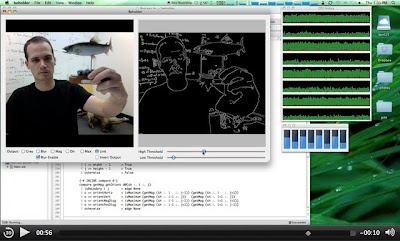 While the Canny algorithm written with Repa doesn't quite match the speed of its procedural counterparts, it benefits from all of Haskell's built in support for purity and type safety, and painlessly scales to multiple cores. You can find more details on Ben Lippmeier's blog.

The Parallel GHC Project is an MSR-funded project to promote the real-world use of parallel Haskell. Part of this project involves effort by Well-Typed to provide tools for use by the general community.

Last week, Well-Typed were excited to announce that we have capacity to support another partner for the parallel project for at least another 12 months. So, if you have a project that involves scaling up to multiple cores, or that deals with some heavy duty concurrency, then we'd love to hear from you. In return for your time and commitment to the parallel project, we'll unleash our team of expert programmers to help build tools and provide support that will help you and the community towards making parallel Haskell even more accessible.

Got something for the digest? Send us an email at . We're particularly interested in short parallelism/concurrency puzzles, and cool projects for featured code. Other comments and feedback (criticism and corrections especially!) would be welcome too.